Behind the Mic: Drew Patterson 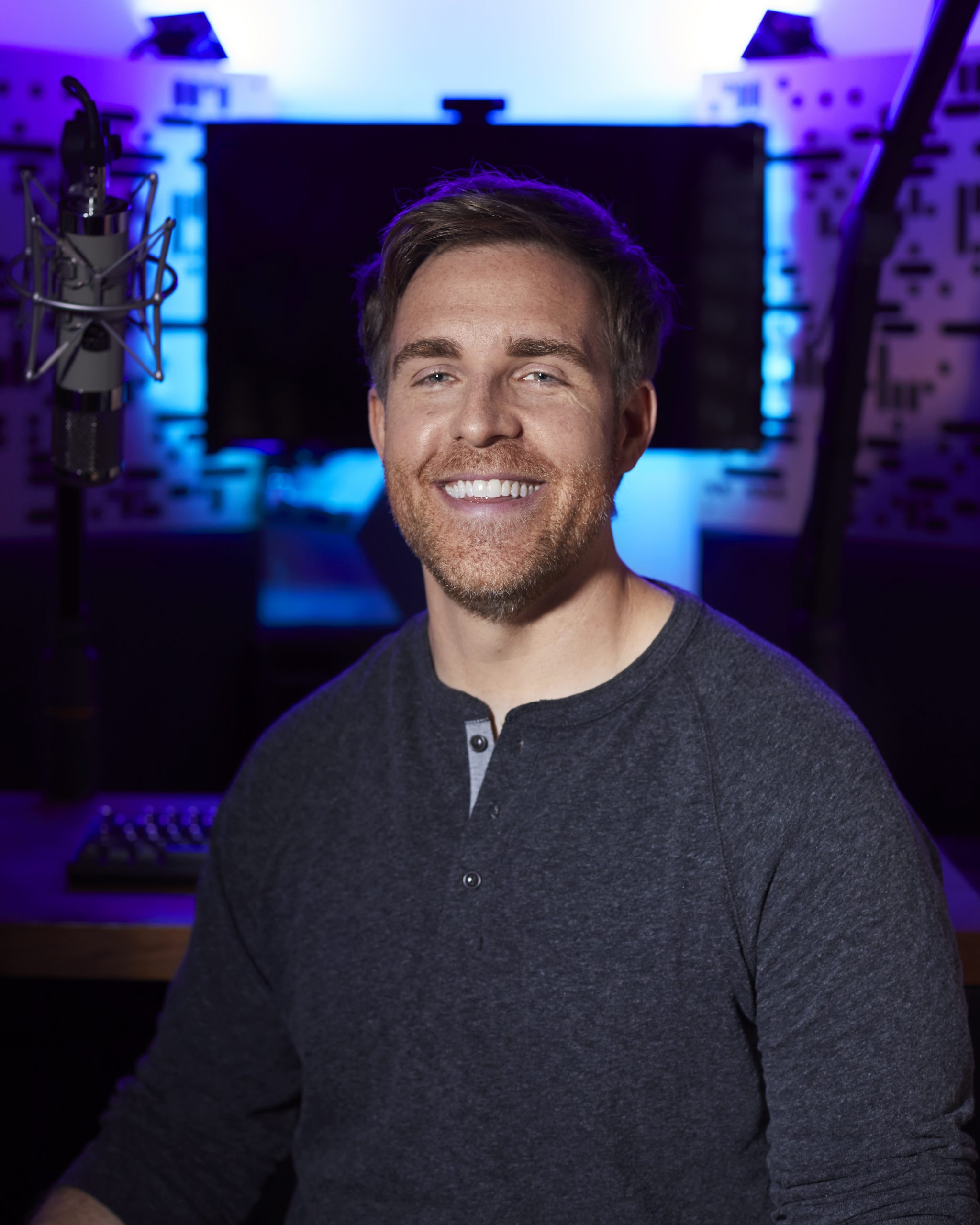 Drew’s voice used to get him in trouble…with a reserved seat in the principal’s office because he couldn’t shut up. Now, it’s how he makes a living (in your face, Mr. O’Malley!). Always a talker, you’ve heard Drew on network promos for your favorite TV shows on ABC, CBS, and Fox; radio stations that play way too much Taylor Swift; and selling you all sorts of things on national commercials!

What radio VO work have you done in the past (stations/markets)? What are you up to presently (freelance/on-staff at a station)?

I’m currently voicing Y100 Miami, KIOI San Francisco, WHQC Charlotte, X929 Calgary, WDCG Raleigh, WWMX Baltimore, and others. In the past, I was the voice of the mighty WAAF before they were baptized out of existence.  I am still a creative director and voice tons of stuff for KPNT and KSHE in St. Louis. My PD, Tommy Mattern, has given me immense freedom to work from home and build a VO career while still keeping a foot in the radio door. I probably won’t leave until they force me out. And I’ve previously produced/voiced for Q101 Chicago (alongside legendary voices Steve Stone and Rena-Marie Villano) and WYSP Philly.

Everything. I’ve never found anything so constantly challenging. The deeper I get into it, the more passionate I get. It’s insanely creatively fulfilling. I get to play all day. In every other job I’ve had (except for waiting tables), it didn’t matter how hard I worked – my salary was fixed. It’s hard for me to feel much incentive to hustle in that environment. With voiceover, if I work harder and improve my product, I reap the rewards – not some corporate overlord buttholes taking an $8,000,000 bonus right after laying off a quarter of the company. I’ve always had the feeling of dread that a radio layoff was inevitable (though I’ve somehow miraculously avoided it). Voiceover gives me some control over my career. Losing a client can hurt, but I have other clients to fill the void. I’m no longer dependent on the fleeting nature of radio. No more moving to start over in a new city for a radio job again.

Radio paved the way. I was producing Brian Cooney and Ann Dewig while at WKRZ Pittsburgh. One of the DJs was with a local agency and encouraged me to join. I was by a microphone all day anyway. 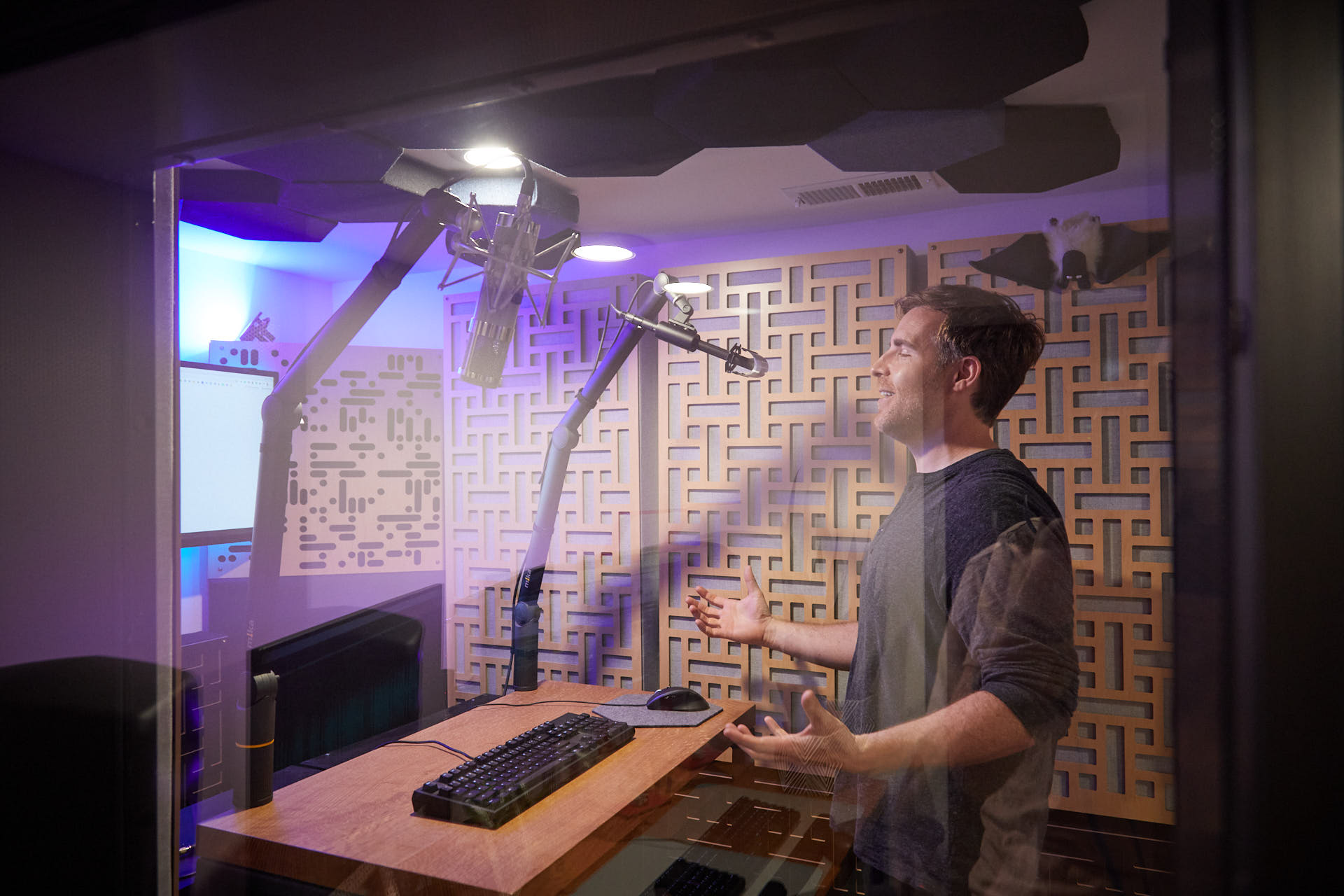 My first gig was a commercial campaign for the Columbus Dispatch. Memorable gigs along the way: I voiced a mock movie trailer for Saturday Night Live and had to do a pickup during the live show minutes before my bit aired! I’ve been fortunate to voice nine seasons of Impractical Jokers on truTV. I’ve voiced network promos for Lucifer on Fox; The Code on CBS; plus The Chew, Press Your Luck, and Card Sharks on ABC. I just booked a big campaign for a new show on Disney+ called Big Shot. I’m also somehow the voice of the Creation Museum in Kentucky, which always gives me a giggle because I’m a total heathen.

Steve Stone, Ann Dewig, and Mike Bratton had a profound effect on me when I was first starting and were extremely generous with their time and advice. Seeing them leave extremely successful radio careers for VO helped me believe I could pursue the same. Steve also helped me get my job at KPNT (where I’m lucky to still work with him) and I’m forever grateful. I love Keith David’s VO work. Dee Bradley Baker is a creative powerhouse. Peter Coyote is a tremendously talented narrator that makes me lean in close. I produce Howard Parker on KSHE and am in constant awe of his cavernous pipes – his voice makes me feel like less of a man. 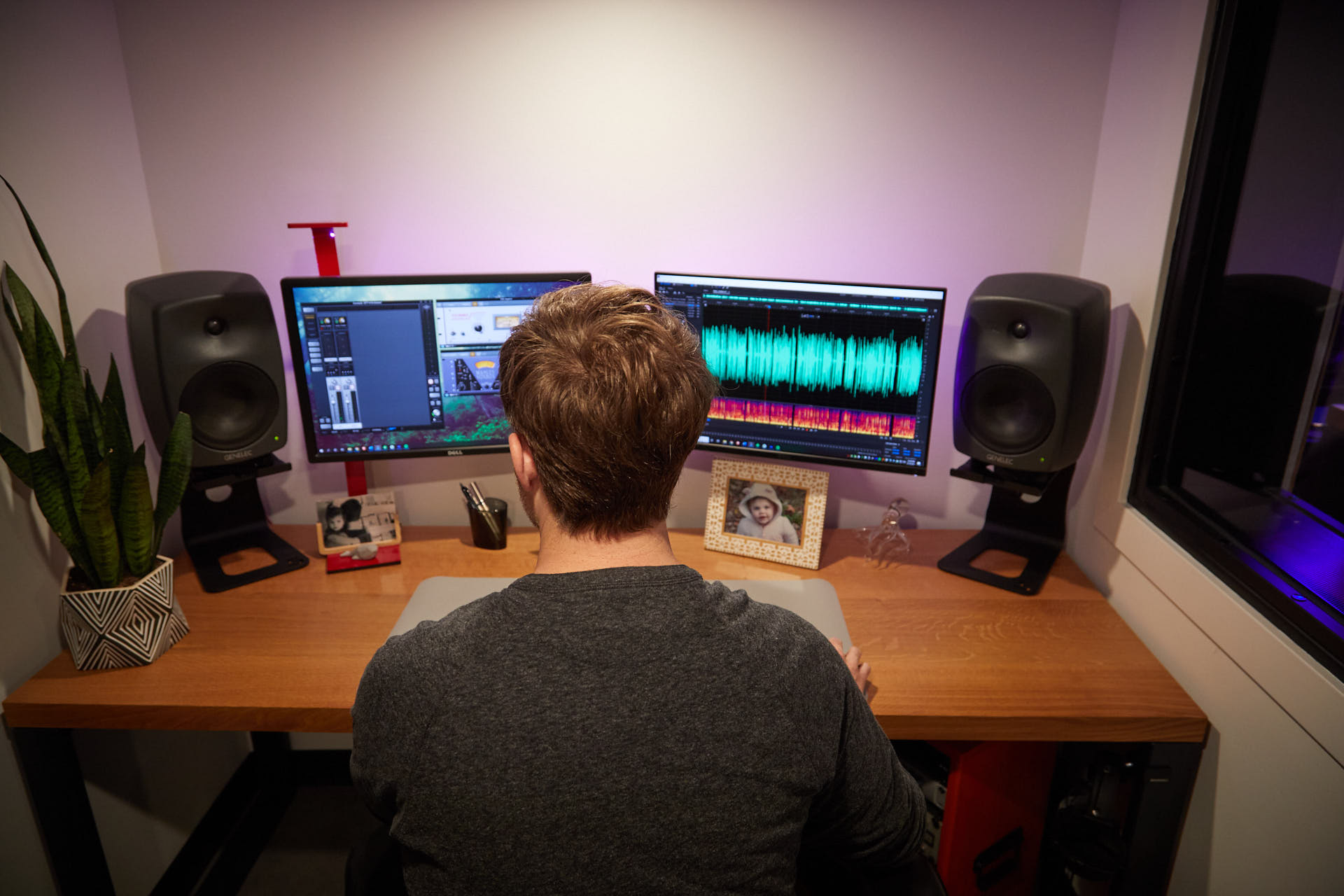 The first time? I still record stuff to hear myself and tell everyone to shut up so I can hear it!

Primarily, the ability to even do this job. Technology has given me access to big-time VO gigs that used to be LA/NY only. And also freedom! I can actually travel with my family and still knock out VO if needed. And with hardware emulation, you can get the big bucks sound for a lot less money.

I built a studio and booth in my basement. I’m using a 416, of course, and a Bock 241 paired with a Hardy M-1 pre, going into the Apollo Twin. I had the brilliant George Whittam build me some stacks to bring the beef! On the road, I’m using George’s Tri-Booth, a 416, and a lil Focusrite interface. 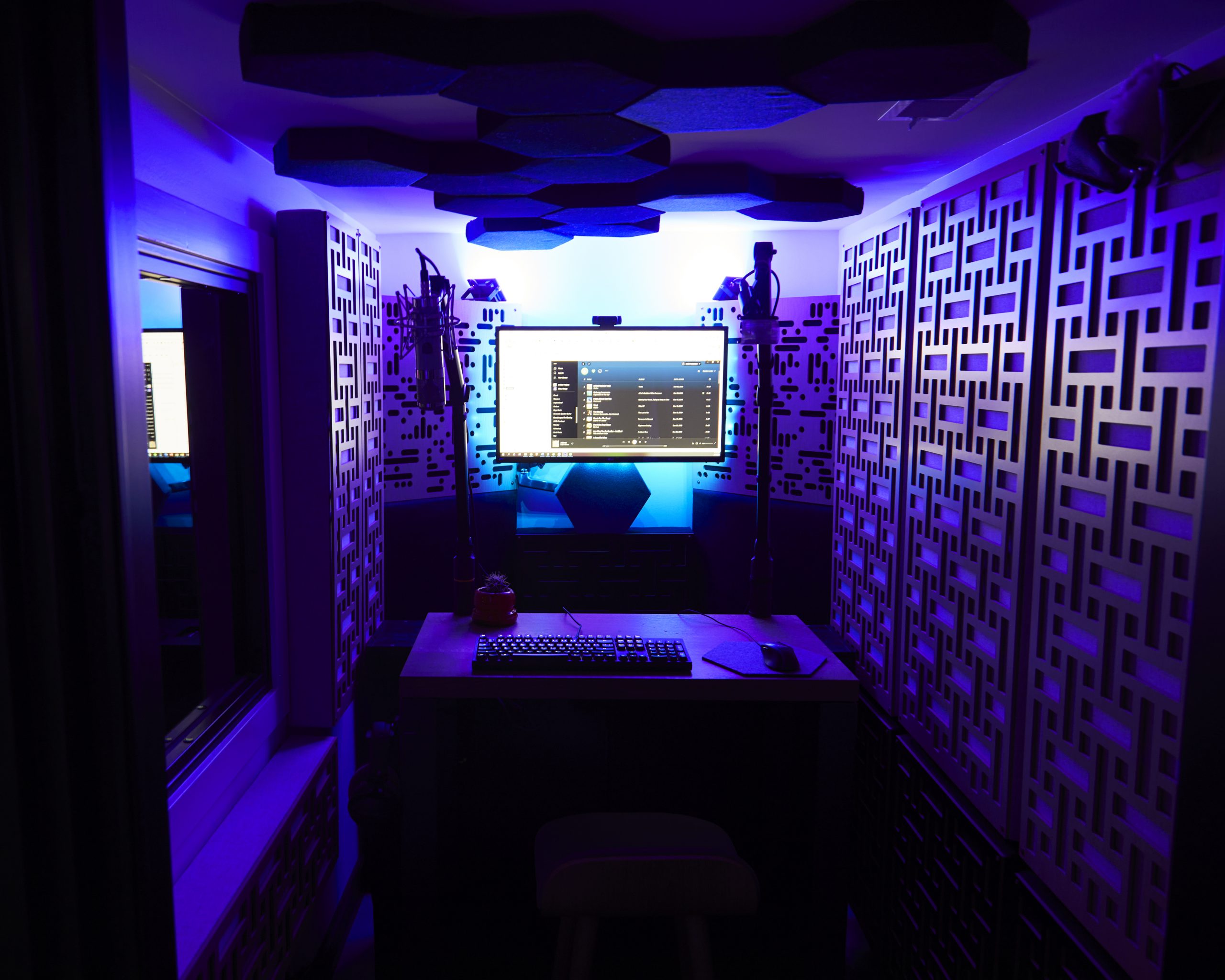 Could Drew’s VO booth be any cooler?! (The answer is no…but adding some Gary wallpaper wouldn’t hurt)

I record VO into Audition CC. I still produce my radio creative on Vegas 7.0. It ain’t fancy, but it gets the job done. I used to be plug-in obsessed, but my focus has shifted to VO.

If you want to improve, yes. If you’re happy sticking to radio only, maybe you don’t need it. But if you want to diversify, radio doesn’t do a great job of preparing you for other realms of voiceover. If anything, you’ll likely have to unlearn some bad habits. And you’ll need someone to help you identify the things that might be holding you back. I am constantly trying to evolve as an actor.

David Lyerly has been a guide throughout my career and I attribute much of my success to him. I also take regular acting and singing lessons in St. Louis. And the pandemic has forced a lot of NYC/LA acting and improv schools online, so I’ve been catching up on all the acting training I missed while working in radio. I’m currently taking a Shakespeare beginner acting class to really make myself uncomfortable and continue growing. I crashed and burned in my first class when I had to perform a Shakespearean monologue in front of some very talented actors.

This job is auditioning. And for me, keeping my head straight throughout the day so I’m in a good place mentally when big auditions come in. I do work as it comes in. TV affiliates always have the tightest turnaround, so they usually get first priority. I’d love to pander to this crowd and say radio clients always get first priority, but I tend to first focus on my biggest-paying clients.

Auditioning, my agents, and social media! Shameless plug: I’m on IG as instadrew. And Twitter as @drewpattersonvo!

Hire a professional to get your room sounding good and your mic chain solid. Learn how to use your mic properly. It’s tempting to think gear is the thing that will take you to the next level. While it’s important to sound good, the performance is primary.

Take acting classes, take improv classes, learn how to use your voice properly. Also, I just heard this in an acting class and loved it: it’s not about HOW you do it, it’s about figuring out WHAT you’re doing and then just doing it. 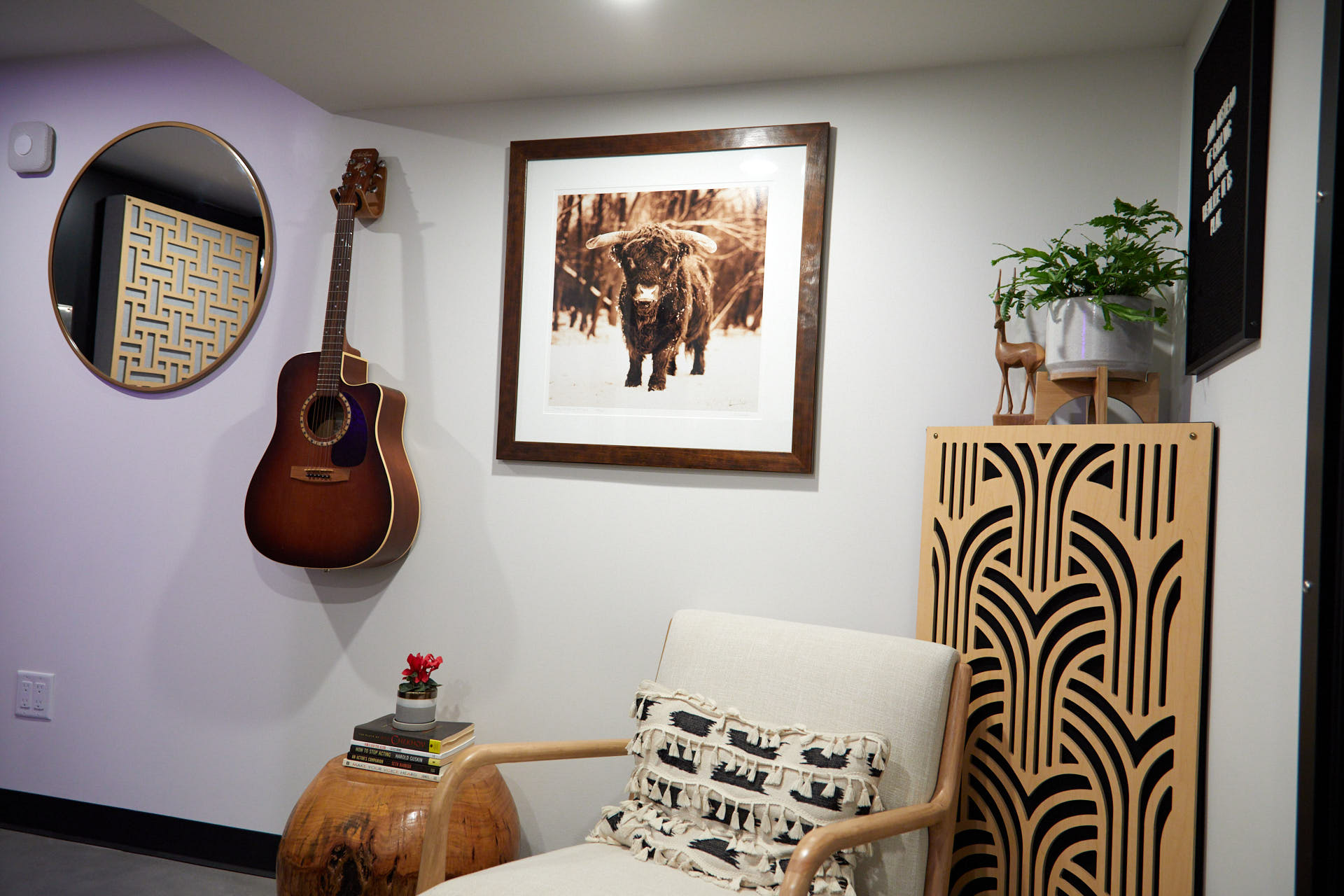 Tip #4: Make sure your studio vibes are juuuust right.

There’s no time like the present. Literally, the only time that exists is right now. And you’re wasting it reading this.

Pepperoni and then gimme even more pepperoni. Nope, a little bit more, please. Keep it coming until I get the meat sweats.

Alan Watts. His books were transformative for me. 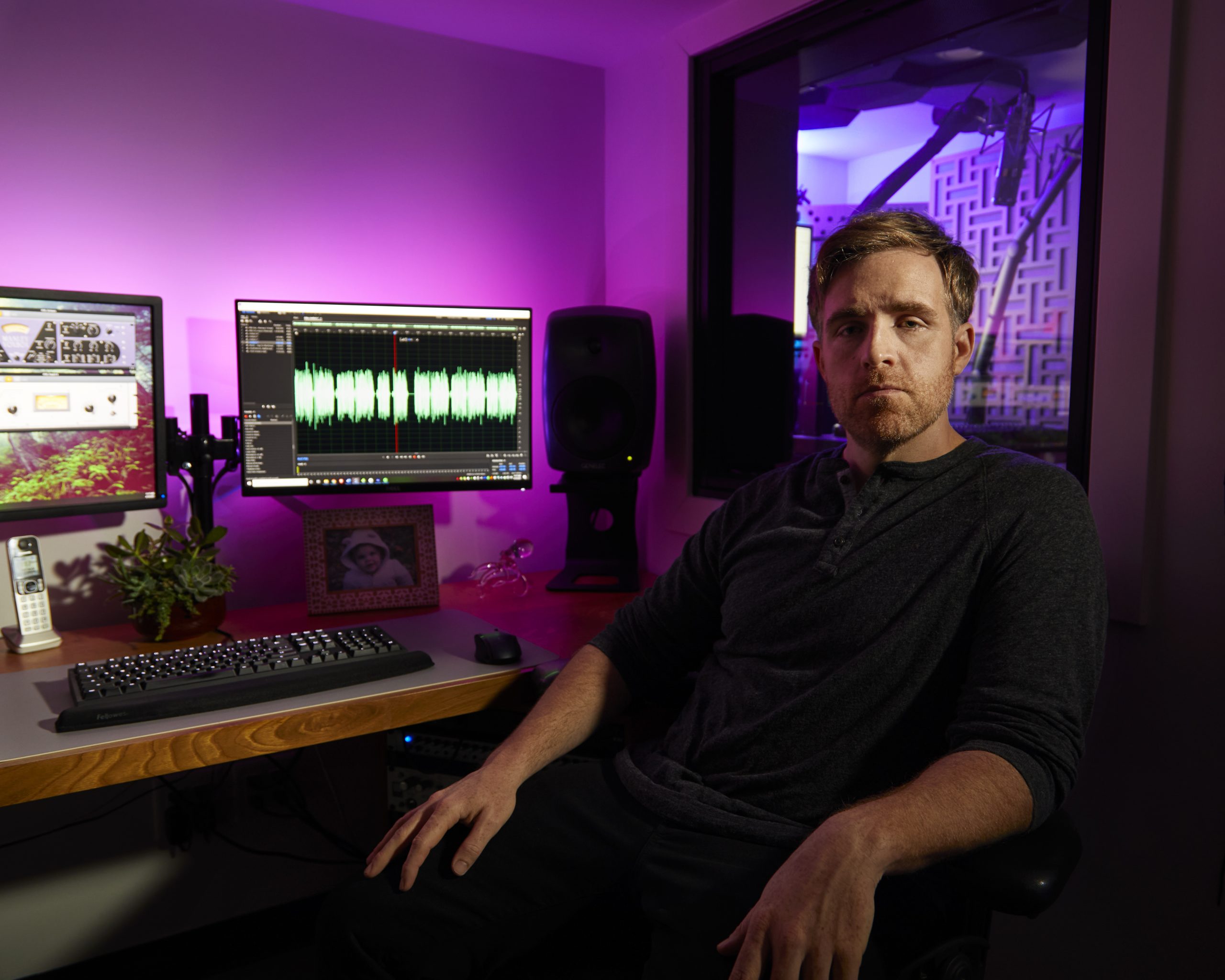 Drew Patterson is represented by Atlas and available for barter through Benztown.