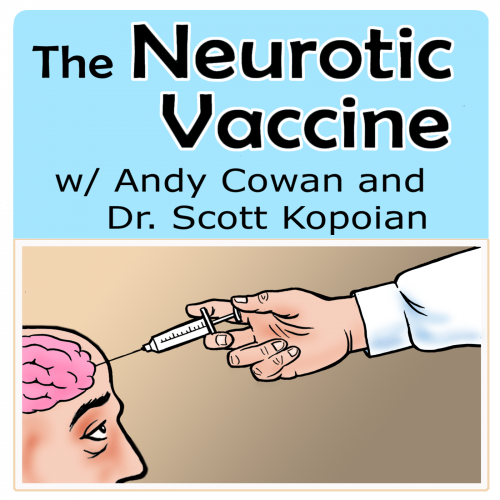 LOS ANGELES, CA – November 15, 2022 – Benztown + McVay Media Podcast Networks announce the launch today of a quirky and forthright new comedic podcast years in the making, The Neurotic Vaccine, created and hosted by Andy Cowan, award-winning writer for Seinfeld, Cheers, and 3rd Rock from the Sun. In The Neurotic Vaccine, Cowan invites fellow neurotics to share his mini-therapy sessions with co-host, clinical and forensic psychologist, Dr. Scott Kopoian. Together with their guests – including inaugural guests Jay Leno and Cathy creator, Cathy Guisewite – Cowan and Kopoian work toward the daunting goal of immunity to neurosis. The result is candid and humor-driven destination listening.

Listen to the series trailer and first two episodes of The Neurotic Vaccine podcast now at: https://omny.fm/shows/the-neurotic-vaccine-with-andy-cowan-and-dr-scott and wherever podcasts are streamed.

In Session 1, Andy vents with Dr. K over a phone rep’s “Is there anything else I can help you with?” and learns from Jay Leno about the key to success in show business, and to be glad that bad things happen.

In Session 2, Andy raises the relationship red flags with Dr. K, and chats with guest Cathy Guisewite about the four basic guilt groups along with her guilt about ending her comic strip.

“Andy Cowan makes me laugh, a lot. Then he makes me think.” – Jason Alexander

“Andy Cowan’s unique mind operates at the turbulent intersection between the generations, the centuries, the down-to-earth, and the absurd. He is a largely unsung genius and potential cultural hero to the gigantic but quietly suffering population of neurotics that drag their sorry asses amongst the rest of us who are perfect.”                      – Michael Harrison, Publisher, Talkers Magazine 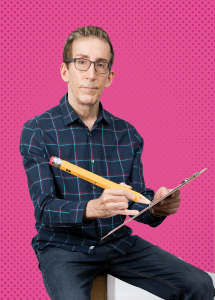 Andy Cowan, creator and host of The Neurotic Vaccine podcast from Benztown + McVay Podcast Networks, is an award-winning writer, producer, and performer, the only writer associated with Cheers, Seinfeld, and 3rd Rock from the Sun. Credits include multiple episodes of Cheers, Seinfeld (writer, program consultant), and 3rd Rock from the Sun (writer, executive story consultant), and numerous other comedies and talk/variety shows among his writing credits. He won a CableAce Award for producing, writing, and starring in the Showtime 60 Minutes send-up, 6 Minutes. He began his career as a segment producer, writer, and performer on The Merv Griffin Show during the ‘80s and interviewed hundreds of luminaries from Orson Welles to Jerry Seinfeld. His memoir, Banging My Head Against the Wall: A Comedy Writer’s Guide to Seeing Stars, foreword by Jay Leno, was released by Black Rose Writing in 2018 and acquired in 2019 by The National Comedy Center in Jamestown, NY, what Time Magazine cited in 2019 as one of the world’s 100 greatest places. He received a Who’s Who in America Lifetime Achievement Award in 2017. For more information, visit: www.andycowan.net. 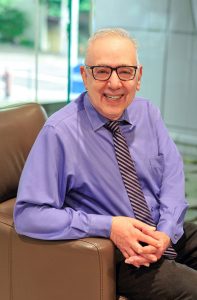 Dr. Scott Kopoian received his Ph.D. in clinical psychology from California School of Professional Psychology Fresno. He is a licensed psychologist in California and Oregon and a Qualified Medical Examiner (QME) in the state of California. Kopoian collaborates with his clients to achieve measurable goals. His approach is scientific, empirical, and individualized.