Behind the Mic: Chad Letts 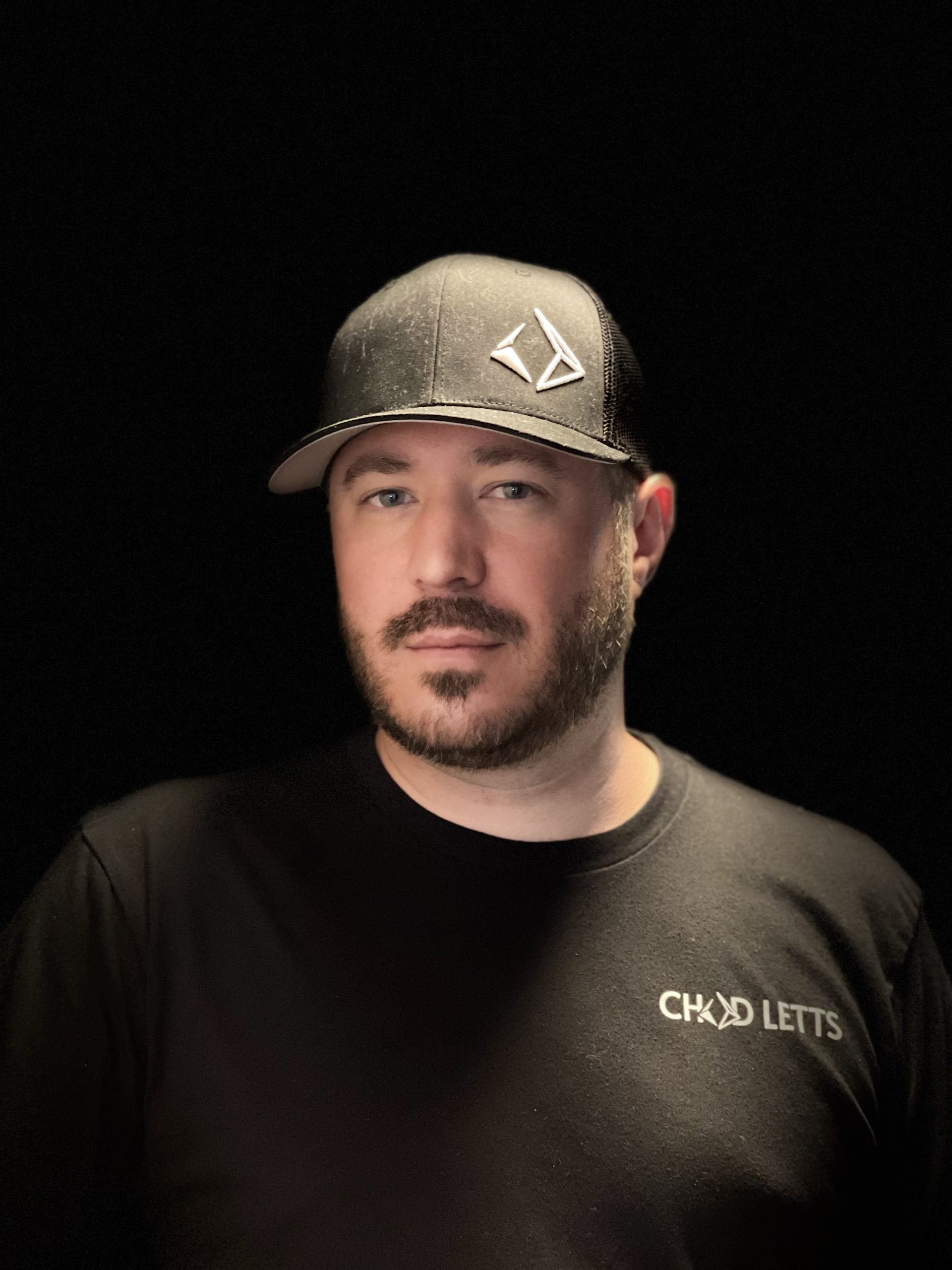 Chad Letts has been a voice actor since the late 1990s. His “Guy Next Door” vibe and youthful energy have allowed him to play roles ranging from early 20’s to early 50’s. He’s been cast in nearly every genre of voiceover and continues to stay hungry looking for opportunities to tell clients’ stories. He works out of his home studio in Las Vegas, NV and can be booked on short notice at ChadLetts.com/book.

I retired from radio in 2017 and have been working full-time as a voice actor since 2013. I’m doing primarily commercial and promo work, but have worked in narration, video games, web, non-broadcast, industrial, and IVR. I keep busy with and feel so grateful for my career and clients.

I love the freedom it gives me. No 2 days are alike, and I never know what’s going to end up in my inbox. I love the creative part of VO. Interpretation of copy, playing with the reads and developing characters and perspectives. And I like sharing what I’ve learned with others, but especially radio people that want to get into the business. I love it all.

In 1997 I was childhood friends with Ashley Angel before he went on to become part of O-Town — I know — and he introduced me to Victor Ireland. Victor took Japanese video games and translated them into English for the American market. After that, I went on to a career in radio and did the tour of California before being laid off in 2008. I started auditioning on the pay-to-play sites while looking for my next radio gig (Vegas) but I never stopped auditioning and growing in voiceover.  It grew into a full-time gig that outpaced my career in radio and I’ve never looked back.

I got my first voice acting gig in a video game called Lunar: The Silver Star Story Complete. Since then I’ve been the national voice of AutoNation, Sport Clips Haircuts, Rent-A-Center, and the voice of FOX’s Ultimate Tag. But the most memorable one was for Mercari that aired during Super Bowl LV.

As a kid I always wanted to know who the movie trailer guy was, not knowing he was Don LaFontaine. My friends and I would mimic his voice terribly with our prepubescent ones. Mentors have been Melissa and Troy Moats, Jason Rooney, and Debbie Cope.

I dread thinking about that because I have no idea, but I’m certain that I wouldn’t be as happy as I am now. I would probably still be in radio, or I’d be working in something creative.

It was a moment of confusion, shock, disbelief, and pride all rolled into one. I was watching South Park and the commercial I did for a workout app aired and I just rewound the spot over and over in disbelief. I walked a little taller that day. 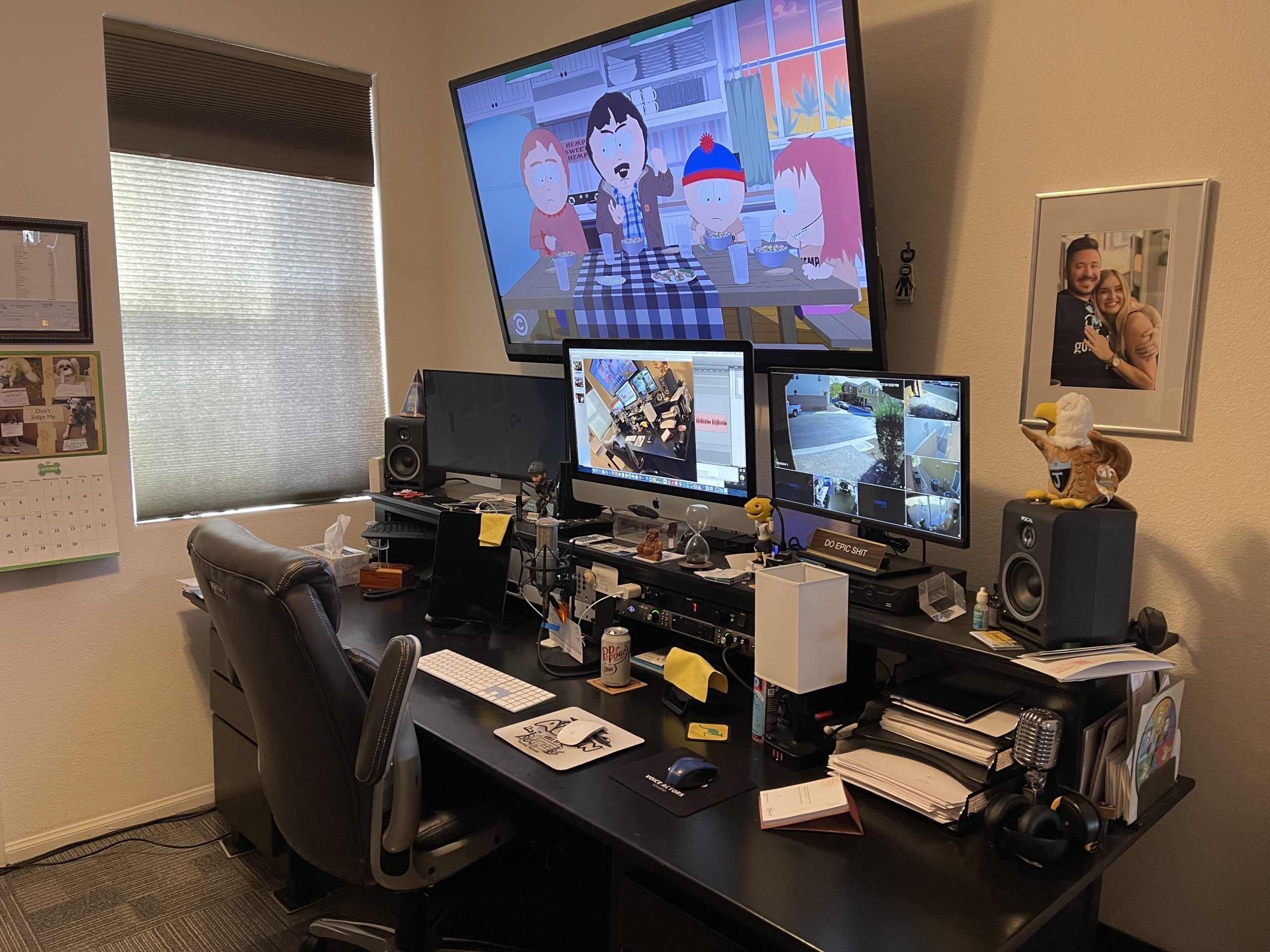 Wait…you’re telling us if we become VO artists then we can watch South Park all day while we work?! SIGN US UP!

(Can you find the piece of BZ swag featuring Gary in this pic?)

I think it’s changed everything. Here’s just a few…

1) Even before the pandemic, I was able to self-bridge while on the road. Using the Apollo Console, a Verizon JetPack, SourceConnect, and my mobile rig, I was able to do an ISDN session from a rental car in Billings, Montana and the client had no idea that I wasn’t in my home studio here in Vegas.

2) I invested in a RAID drive so I can access all the auditions I’ve ever done from any computer or studio in the world with an internet connection. That way when I need to reference an audition or something I’ve done for a client, I can pull it from anywhere and be able to take care of the client’s needs from my mobile setup.

3) I added a mic to my desk to make sure all my Zoom meetings sounded as best they could. I took an old mic and hooked it up to the Apollo and dialed it in. Now I can use either mic; whether it’s for directed sessions, workshops, or chatting with family, I have good clean audio.

Essentially, I have the same setup in my mobile rig as I do in my home studio. The main difference is the plugins I use on the road. I use C-Suite, I apply a light gate and with those two things, I can emulate the sound I get in my home studio. If needed, I use iZotope RX’s Spectral Denoise to take out any hotel room low-end rumble. George Whittam is a wizard with this stuff.  He’s been SO essential to my engineering needs.

I use Pro Tools and the Universal Apollo series (Apollo x6 and the Apollo Arrow for my mobile rig). That’s it.

Yes, and I absolutely recommend it. I recommend Melissa Moats, Marice Tobias, Dave Walsh, and Thom Pinto. All have unique methods, tips, tricks, and insights that have been invaluable. 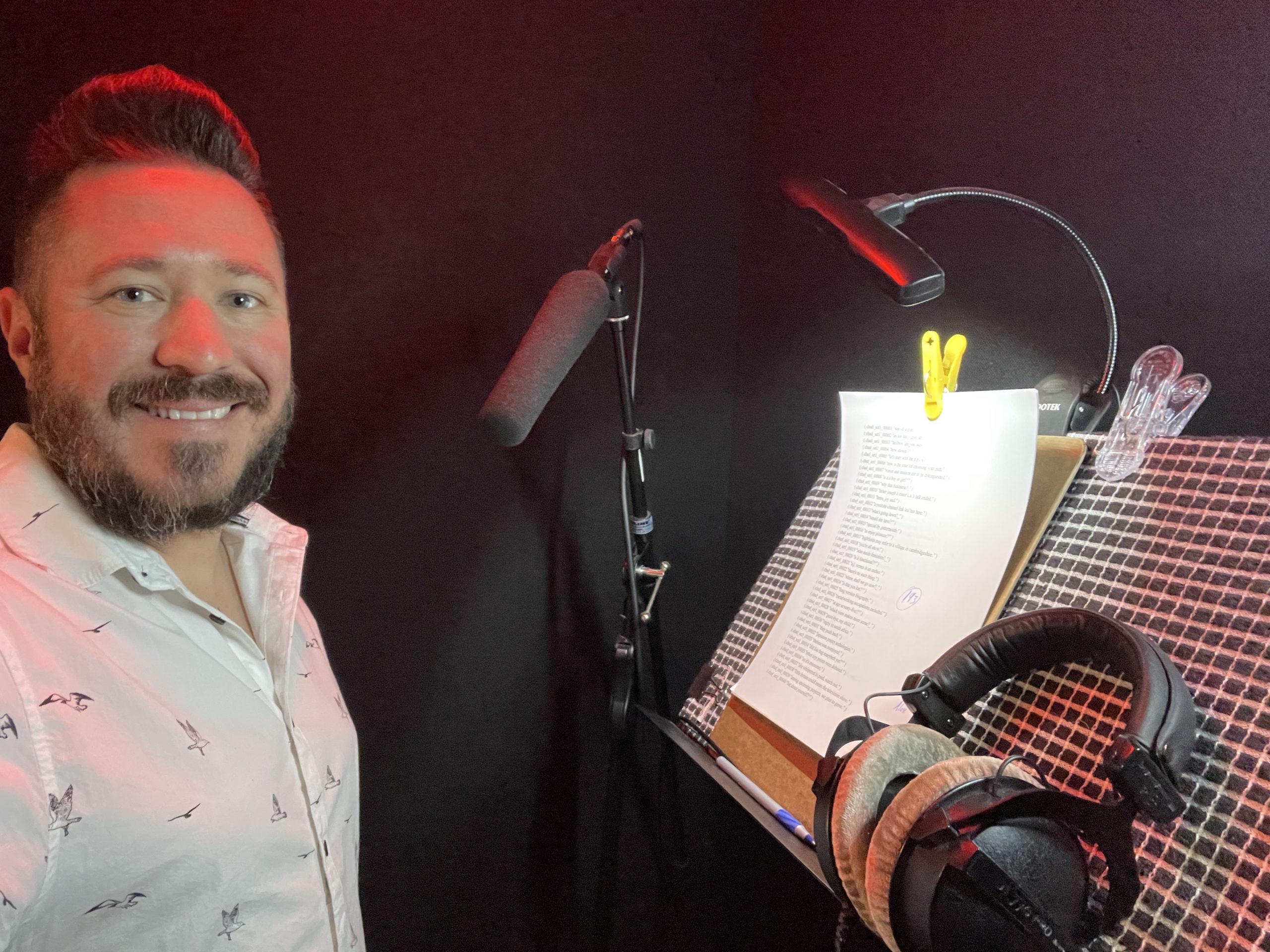 If I’m not doing a job, I’m auditioning or looking for auditions. On any given day, it’s about 50-50.  I always prioritize the paying gigs over auditions, but I rarely leave the studio at night if there’s an audition I haven’t finished.  Auditioning is the job.

I have a controversial perspective on this topic and many vehemently disagree with me. My thought is that if I have an hour to market, or an hour to audition, my ROI is ALWAYS better on auditioning for people that are looking for voice actors than it is on sending newsletters, emails, and the like.

I think in our industry, relationships and auditions are the most effective forms of marketing. The one place I do think is worth spending time on is a quality website with good branding. It took me years to conceptualize the website I have now and I don’t know of any other VO site like it.  It’s got a LOT going on above the fold, kind of like in my brain lol.

Aside from the self-bridging that I mentioned earlier, the mobile “booth” I built for about $150 travels with me on longer trips. It’s PVC pipe cut into 24-inch sections that will fit in a suitcase. I put the pipe together and I have a heavy moving blanket sewn together that slides over the pipe to form a 2’x2’x6’ “booth”. It’s not soundproof but it really helps with consistency and helps control the acoustics when traveling.

I think controlling your breathing and good mic techniques are fundamentals that need to be mastered. I use a LOT of lip balm to help with “lip-smacking” and if I have mouth noise, brushing my teeth always fixes it. Sometimes I brush 4 times a day. My dentist loves that. But in the last year, my favorite plugin has been C-Suite. The most used plugin, though, is iZotope RX. 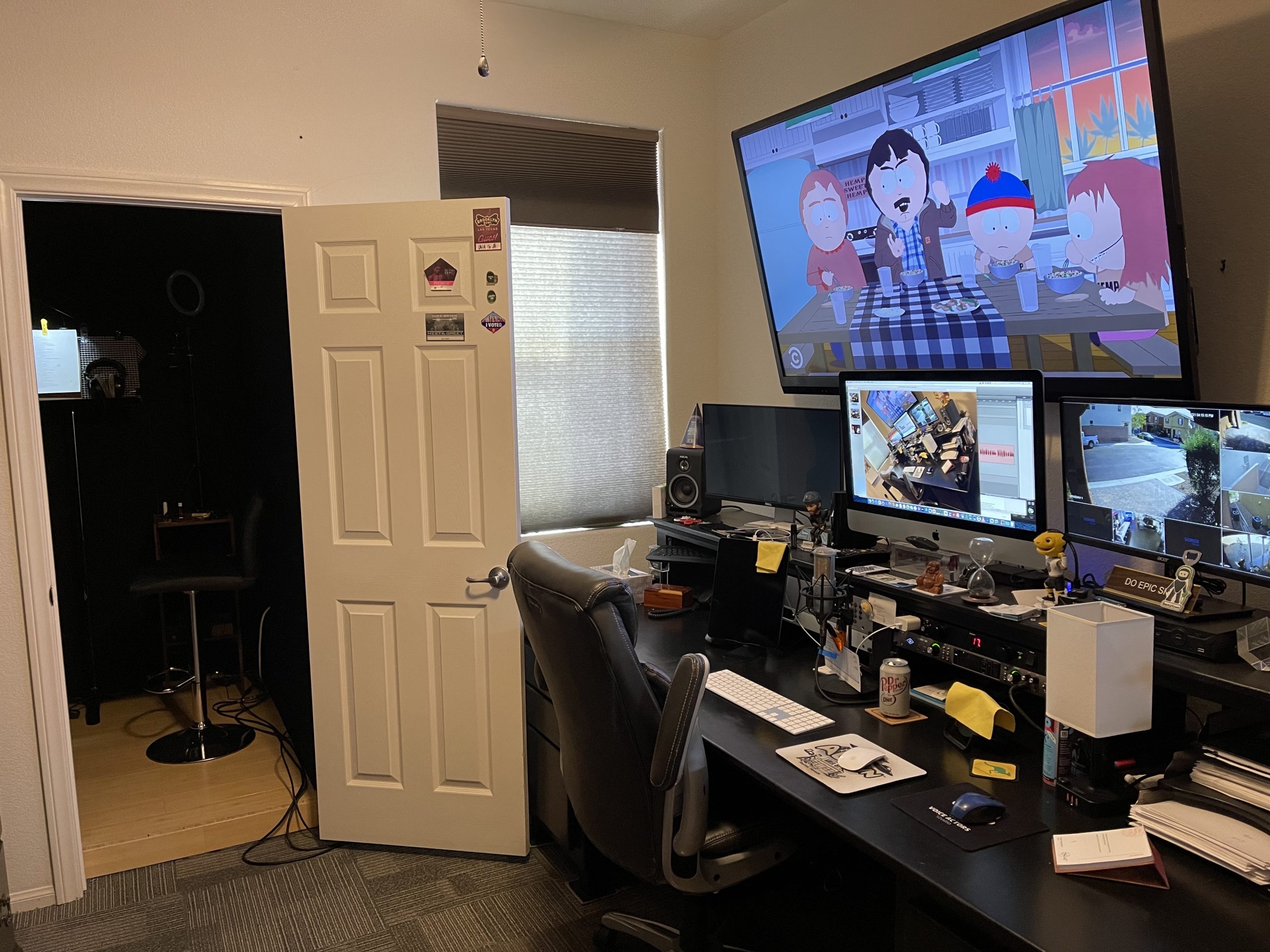 You know what they say…when one door closes, another door opens

and there’s probably a VO booth behind it (or something like that).

Absolutely. While I approach them both from a storytelling point of view, the cadence and intention are different.

Starting out in voiceover is a slow burn. Don’t compare where you are in your VO journey to where someone else is in theirs, but DO be persistent. Build your repeat client list as soon as possible and nurture it. TAKE CLASSES FROM A REPUTABLE COACH. I probably should have started with that last one.

TWO?!?! Um, I’ll just tell you my favorite pizza. The Great White at BJ’s Brewhouse. No crust, just pizza. And there goes my diet…