Behind the Mic: Charese Fruge 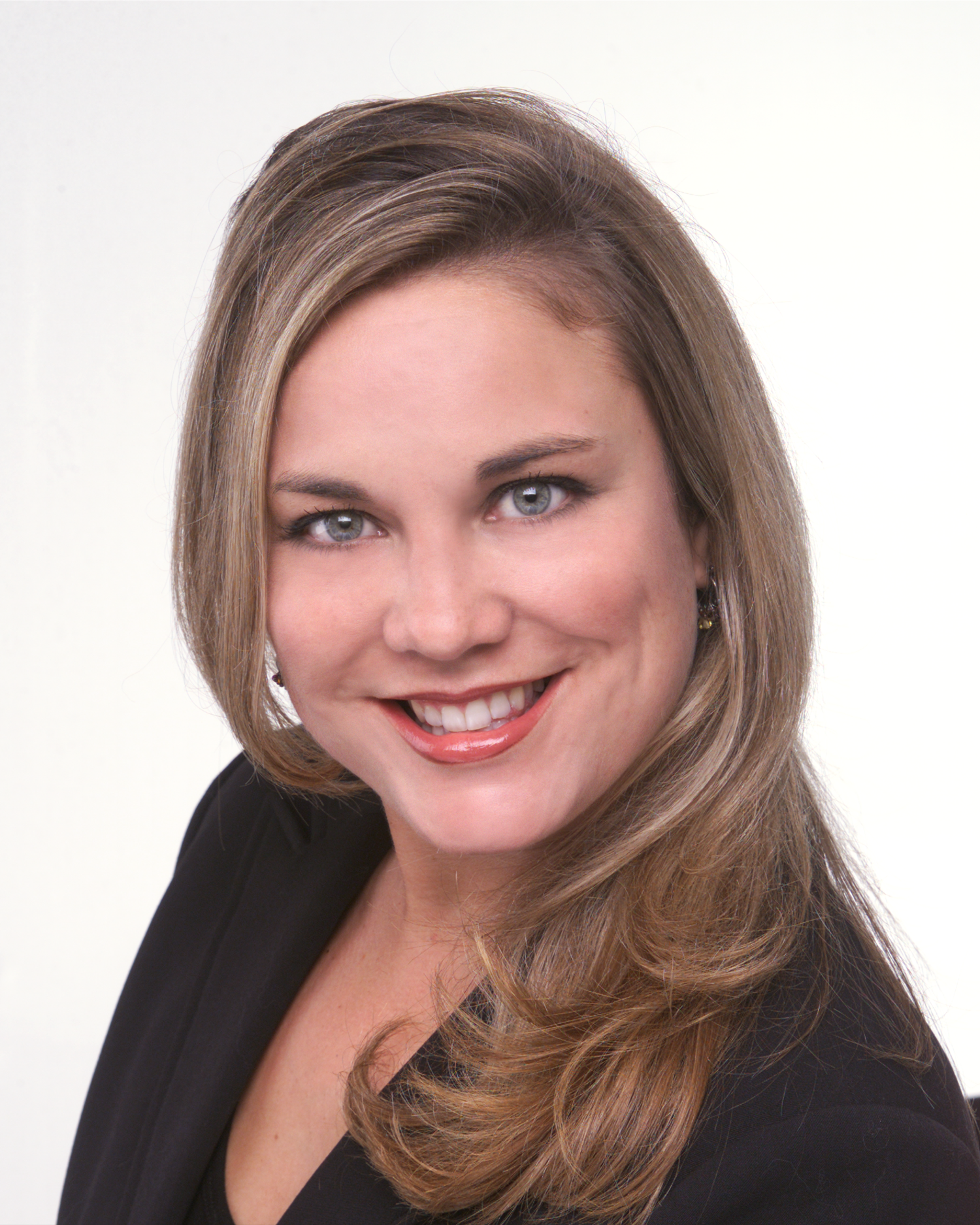 Charese has been voicing major market radio stations and TV campaigns across the country for over 20 years in markets like New York, Los Angeles, San Francisco, Houston, San Diego, Las Vegas, and New Orleans. She’s from the New Orleans area and currently lives in the Entertainment Capitol of the World, fabulous Las Vegas. Between the two eccentric cities and her resume, which looks like a Verizon wireless coverage map thanks to radio, her voice has/will become the personality and soul of “whatever project you put in front of me.” HA! Kidding…but not really. Seriously though, I love what I do and you can hear it in the passion in my voice on every project I do.

I have voiced just about every station I have worked for. When I programmed for CBS Radio, I was the female voice of several of the CBS stations across the country: KMXB/KXTE Las Vegas, KHMX Houston, KLLC San Francisco, KSCF San Diego, and KZZO Sacramento, to name a few. I was also the voice of KYSR Los Angeles when it was a Hot AC, KALC Denver, KROI Houston, and WNOW Indianapolis just to name a few more.

I currently have my own full-service consulting company MC Media. It’s all freelance work in multiple markets and formats across the country: Voice Over, Voice Tracking, Voice Acting, Talent Coaching, and Content/Music Strategy. I also write two columns for All Access Music Group, “Women to Watch” and “The Bigger Picture.”

So many things. Working with creative individuals who have a passion for music and creative writing who constantly make me laugh. Working from my own studio on my own schedule (as long as I meet deadlines). Being a part of something much larger than just basic audio, meaning being a part of the personality of a brand. Working with different and diverse formats that allow me to expand and challenge my reach while using my lifetime of experience to be a part of the creative process for the people and brands I work with.

Like any good person working in radio, Charese has an arsenal of pics with everyone’s fave celebs.

Honestly, I was probably just working on air one day (millions of years ago) and someone came in and said “Can you lay down a line for me?” It was as simple as that. I spent years in high school and college training for dramatic reading and poetry reading competitions as well as cheerleading and debate. Using my voice just always came naturally to me. Once I laid down that first line, it was just a given that I was now the female voice of the station I worked for. If I wasn’t on the air or programming the station, that’s when I would actually get paid for the extra voice work. As for voice acting, I did morning radio for years and that’s where that started. When I lived in New York, I took some serious improv classes recommended by my dear friends Dara and Gilbert Gottfried and I had a blast, but more importantly, those classes helped me a great deal with radio acting.

My first real job in radio, besides college radio was in Southwest Louisiana at KSMB in Lafayette where I worked for nothing (when it was legal) for 6 months answering phones for “The Underground Lounge.” One night the host of the show told me where the mic button was and that I was on in 30 seconds, and then he walked out the door. That was my first break! The station finally hired me in promotions and actually paid me. I did both until after I graduated. During my last semester of college, I actually did both of those jobs, was a Morning Show producer for the local ABC affiliate, and was driving back and forth between Lafayette and Baton Rouge to finish my last 18 hours so I could graduate. My university (USL) had cut the budget and classes I needed to graduate my last semester, so the Dean allowed me to get the credit I needed at LSU. Since then, the best job and time I ever had was at CBS Las Vegas, where I was the VP of Programming, the PD of KMXB and KXTE, and the female voice for KMXB. We built such great brands and teams. Our stations had personality and success. Radio was fun and the people were/are like family. We wrote promos and copy together and laughed so much. The more input and creativity, the better.

I am lucky. Not only do I get to do VO work, but I currently get to enjoy my lifetime passion for writing. I have always loved writing and I am currently an Editor/Publisher for All Access Music Group, and as I mentioned before, I write two columns for them about topics I am very passionate about as well.

I had mixed emotions. On the one hand, I was like “Holy Sh*t! That’s me.” And I was very excited. Then I was like, “Wow, that’s what I sound like?” I think because I had so much training in high school, I was expecting to sound like Ellen K on the Grammys, but I had a LONG way to go.

Well, for one thing…it’s easier to work from home now if you can’t build a high-tech studio in your house or don’t have access to one somewhere else. With the right mic, acoustics, and audio/editing programs, your work can sound professional, even if you are sitting at your kitchen table during a recording session. You can manage your time better because you don’t have to actually go to a high-tech studio, or you aren’t sharing studio time with others who need it too. So, you are never in a rush. 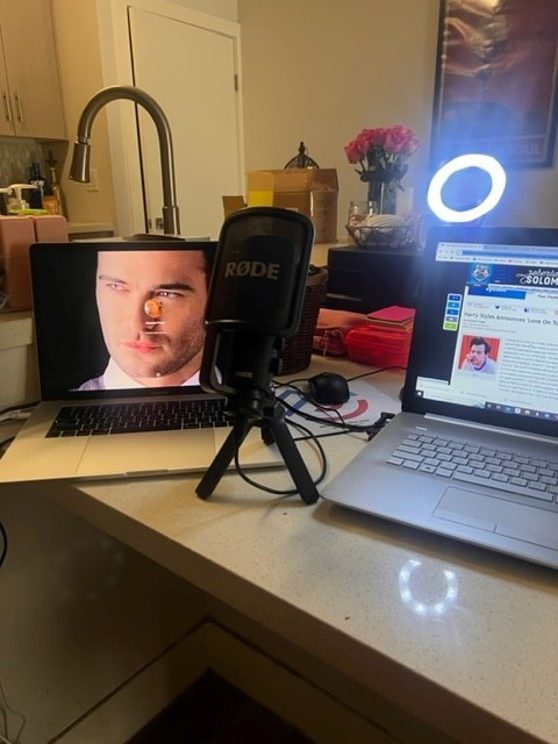 Like a true pro, Charese has her selfie light ready to go for any Zoom meetings!

Not an actual voice coach per say…but in high school, I had a lot of training in dramatic reading and acting at the local theater. I did some Improv in NYC too.

Well, naturally, the first step is the deadline. And the things I tackle first are projects I am already committed to. That comes first. Then I prioritize auditions I really want to nail. Of course, I want to do them all, but I will work first and probably the hardest on things I am passionate about. And then I’ll focus the rest of my time on things that won’t kill me if I don’t get them. As far as how much time I spend on auditioning? If I have the time, I will continue until I get it right. There are times when I get frustrated because it’s just not coming out the way I want it to. So, on occasion, I will sleep on it and start fresh the next day.

Lots of social media. Honestly, for what we do, social media marketing is key to success as well as easy access. So, the marketing message has to include easy access to info on my services. Also working with companies like Benztown and All Access is extremely helpful in not only getting you exposure but also helping to close a deal for you. 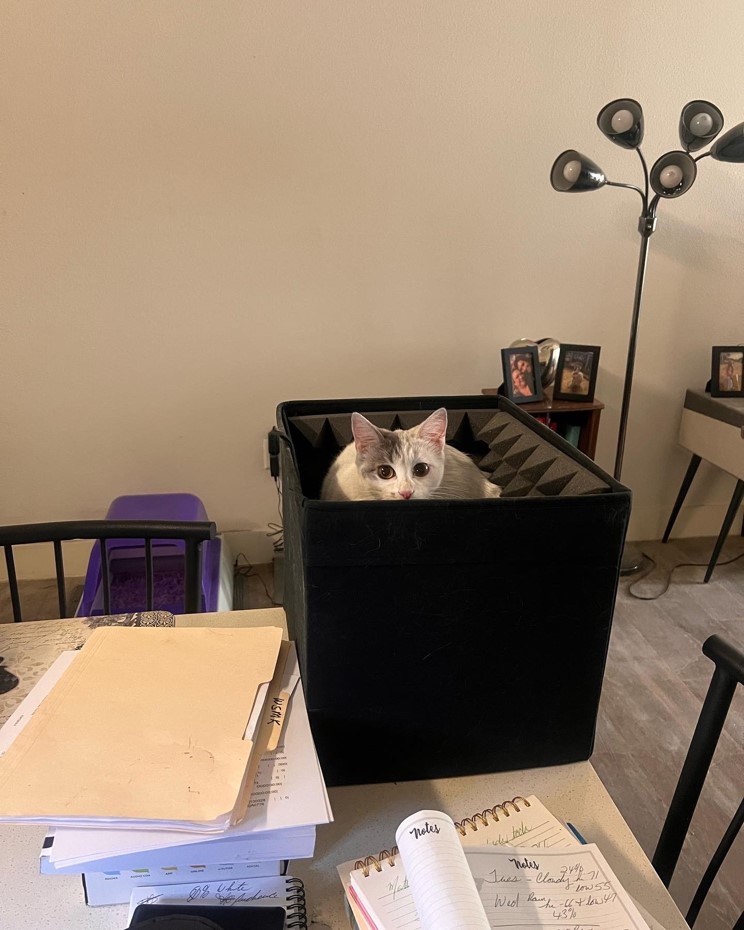 Yes, they are very different depending on the energy of the station, brand, commercial, promo, copy, everything. You just need to be able to match and master the individual energy of each project and that changes case by case.

1. If you aren’t standing up and learning to use your diaphragm, then start now. When you become a seasoned pro you can sit down if you’ve developed your pipes well enough, but for the first 5 years, stand up and build ‘em up. BTW, you have to keep them in shape, (especially when you get older), so consider it a major muscle that is constantly a priority on your workout list.

2. This business is about relationships. So, network like crazy and find someone who can represent you and help market your talent without taking most of your profit.

3. And again, make your demos easy to find and easily accessible.

I lived through them, but I love the 80s. I would totally go back to that decade. The clothes were so outrageous and bright, the jewelry looked like weapons. Artists like Cyndi Lauper, Billy Joel, Madonna…need I say more? The movies that came out, the TV shows…Some of the most influential pop culture and icons of all time. I think it’s what made people from other countries love America. Call me biased if you will, but I think Gen X’ers had the best of both worlds. The first of the tech agers, dual-income homes, and single moms (not that that was fun). But we learned how to enjoy life while knowing we would have to go out and work for ourselves to earn that right. Most of us come and go as we please without anyone’s help, and to me, that is the greatest feeling in the world.

Dolly Parton. I have always idolized her. Even when country music wasn’t cool. Her music spoke to me, and her success inspired me. She came from nothing and turned her life into an empire at a time, and in a genre, where women were barely even noticed professionally. She is the queen of reinvention, and to top it all off, she has given so much back, not only to the community she came from but to the rest of the world. I have so many questions. There would never be enough time. 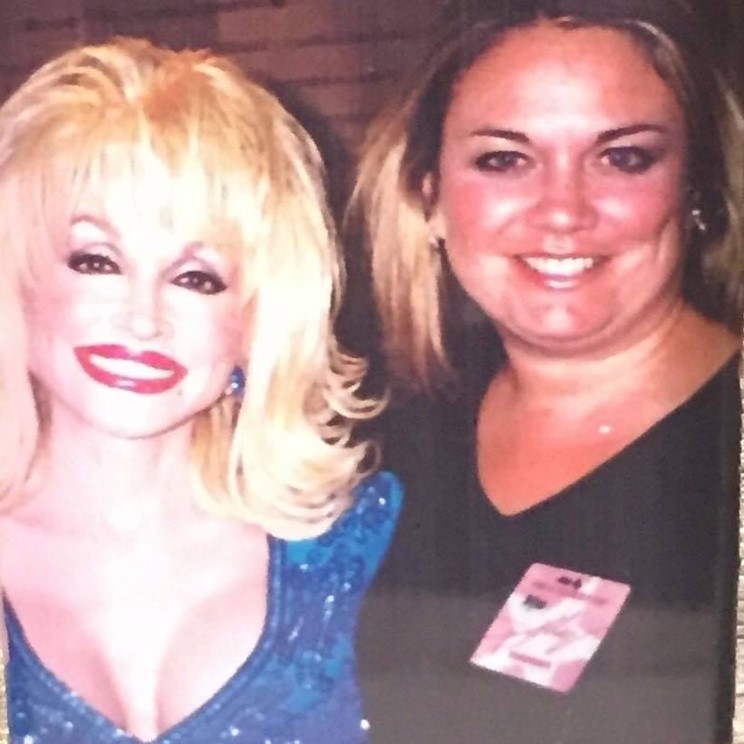