Behind the Mic: Howard Hoffman 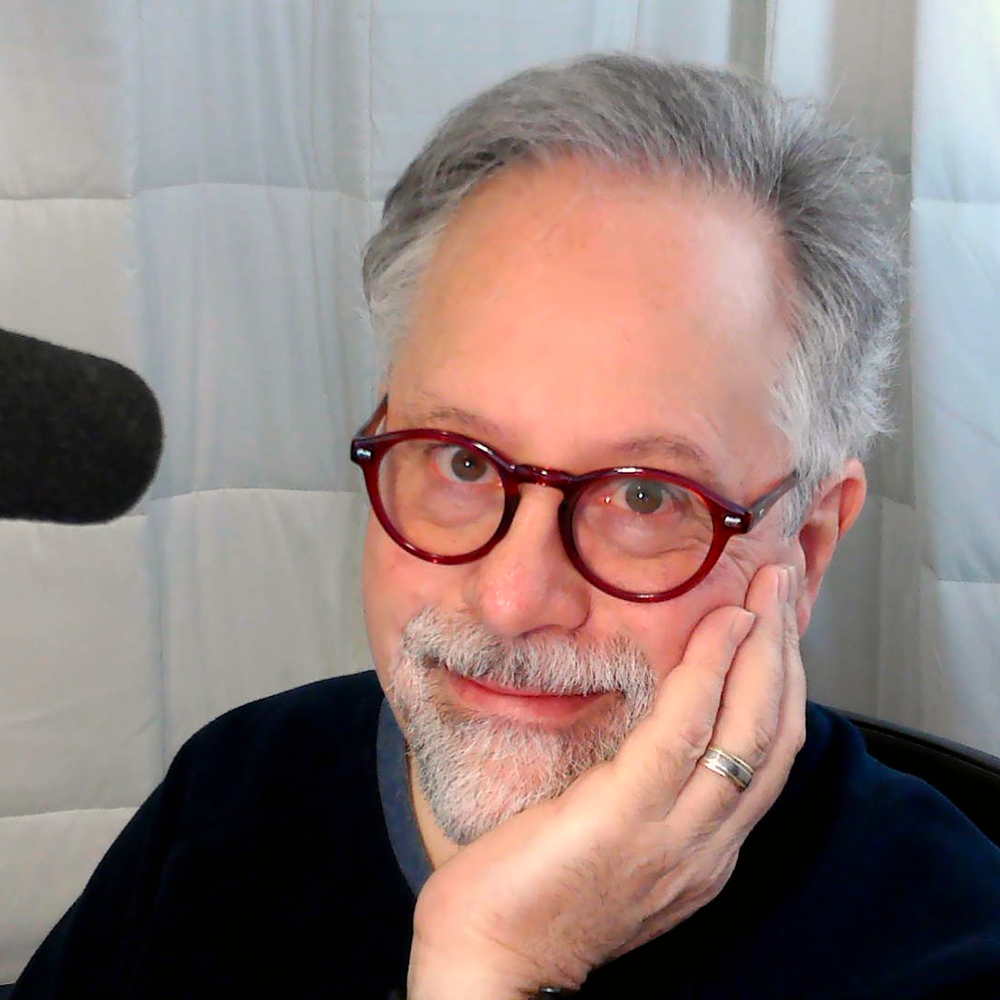 I’ve been a radio rat since my dad had a radio on nearly 24/7 in our house. I grew up on Bob & Ray, Jean Shepherd, a megaton of Mantovani – and when I finally got my own radio, Dan Ingram, Cousin Brucie, Rosko, Jack Spector, and whoever else my transistor would pull in at night. I loved how radio was the soundtrack of our home and took us places we’ve never been. I pretty much vowed to make that my life and I’ve been lucky enough to work with the brightest and the best who taught me how to use audio to entertain and connect.

On the air, I rock-jocked at WABC, HOT97, KMEL, KFRC, PRO-FM, WPIX, and enough more to qualify as a journeyman. In the 90s, I transitioned to production and found I actually had more freedom to tell stories in 60 and 30-second shots (the PPM era got me to shrink that down to 5 to 15 seconds). I spent the better part of two decades at KABC in Los Angeles where I also did an enormous amount of commercial and animation performing. I also freelance for Alpha Media’s KXL, KTSA, and KFOR.

Seeing what I can get away with in the PPM era. There’s always a dramatic aspect to bang-bang radio imaging today, but there are also opportunities to flash some comedy into the mix. And whenever it elicits a response from listeners, it’s magic. From a purely radio standpoint, it’s one of the few remaining outposts of having a blast in our industry. Radio marketing is a never-ending challenge which keeps my spark crackling. 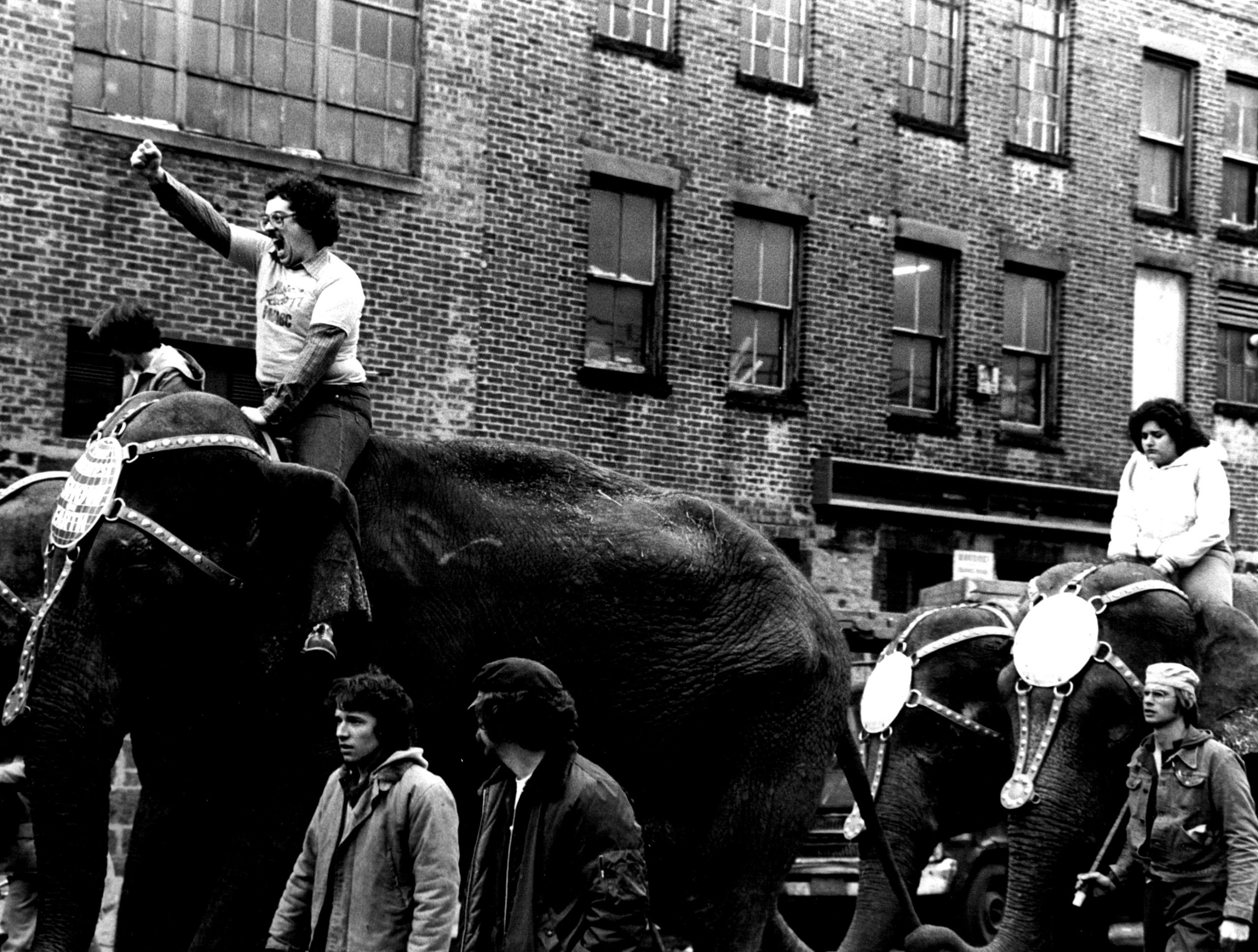 the rail yards to Madison Square Garden while at WABC in 1980 for the Ringling Bros. Circus!

Early in my career, I did a few spots for Columbia and Warner Bros. Records, but VO didn’t blast off until I came to L.A. in the ‘90s. There were studios, directors, agents, on-site auditions – the VO industry was exploding alongside animation’s resurgence and a new golden era of commercial creativity. I was extremely lucky to get in on that and managed to share several awards with these great minds and producers.

My first radio gig was a 250-watt daytimer – WTBQ in Warwick, NY. The faculty adviser of our high school radio station, an English teacher named Hank Gross, did weekends there and got me in to do weekends, donut and pizza runs, and ultimately afternoon drive and PD – all while in my senior year of high school.

Startup stations were my two favorite moments in the business: KAUM (ABC) in Houston and KMEL in San Francisco when it flipped to CHR. There’s something about a take-no-prisoners blow-the-doors-off what’ve-we-got-to-lose situation that just sends electricity throughout the station and your soul. By the same token, a startup I was involved with in Seattle with makeshift studios, internal battles, technical nightmares and coming in as the 4th CHR in the market had its wheels fall off in its first three weeks. Sometimes lightning strikes, and sometimes it just drizzles, and you get wet pants.

Greatest thing to happen: An animated short on which I did all the voices getting nominated for an Academy Award – “The Chicken from Outer Space”

Worst thing to happen: It later went to the long-running series “Courage The Cowardly Dog” and Cartoon Network decided to completely recast it with their people. I still haven’t seen a single episode and I don’t plan to.

My mentor is Jim Brownold who I worked with in Middletown, NY, and followed to Detroit. For animation, Rob Paulsen is hands-down an amazing voice artist. He has a trunkload of characters and can sing pitch-perfectly. When he combines the two, it’s explosive (look up “WAKKO’S WORLD”). He’s also one of the most generous performers I ever worked with, having talked me off virtual ledges over the years.

Straight-up VO, I LOVE what Joe Cipriano did with his career – total focus, naturally gifted and a brilliant self-marketer. I strive for half the discipline he has. It’s not easy, but he makes it look like second nature. And damn it, he’s a nice guy to boot.

There are so many others as well who have helped me immeasurably – Beau Weaver, Keri Tombazian, John Frost, Rick Allen, Ken Levine, Tom Leykis, Jeff Danis, Tom Cuddy and when this gets published, I’ll think of a dozen more. My creative mentors who never knew they were mentors include Stan Freberg, Dick Orkin, Bert Berdis, Dan Ingram, Spike Jones, and my dad who loved radio so much, even though he sold cars for a living.

Something that would make me miserable for certain. I tried pushing myself in other directions, but radio, VO and imaging kept dragging me back in.

Horrified! I was nasal, had a lisp, I was a puker – everything that should have kept me out of the entire industry. So I compensated by going the comedy route in my career which served me VERY well. In time, I learned voice technique, so I was able to do more than just crack wise. 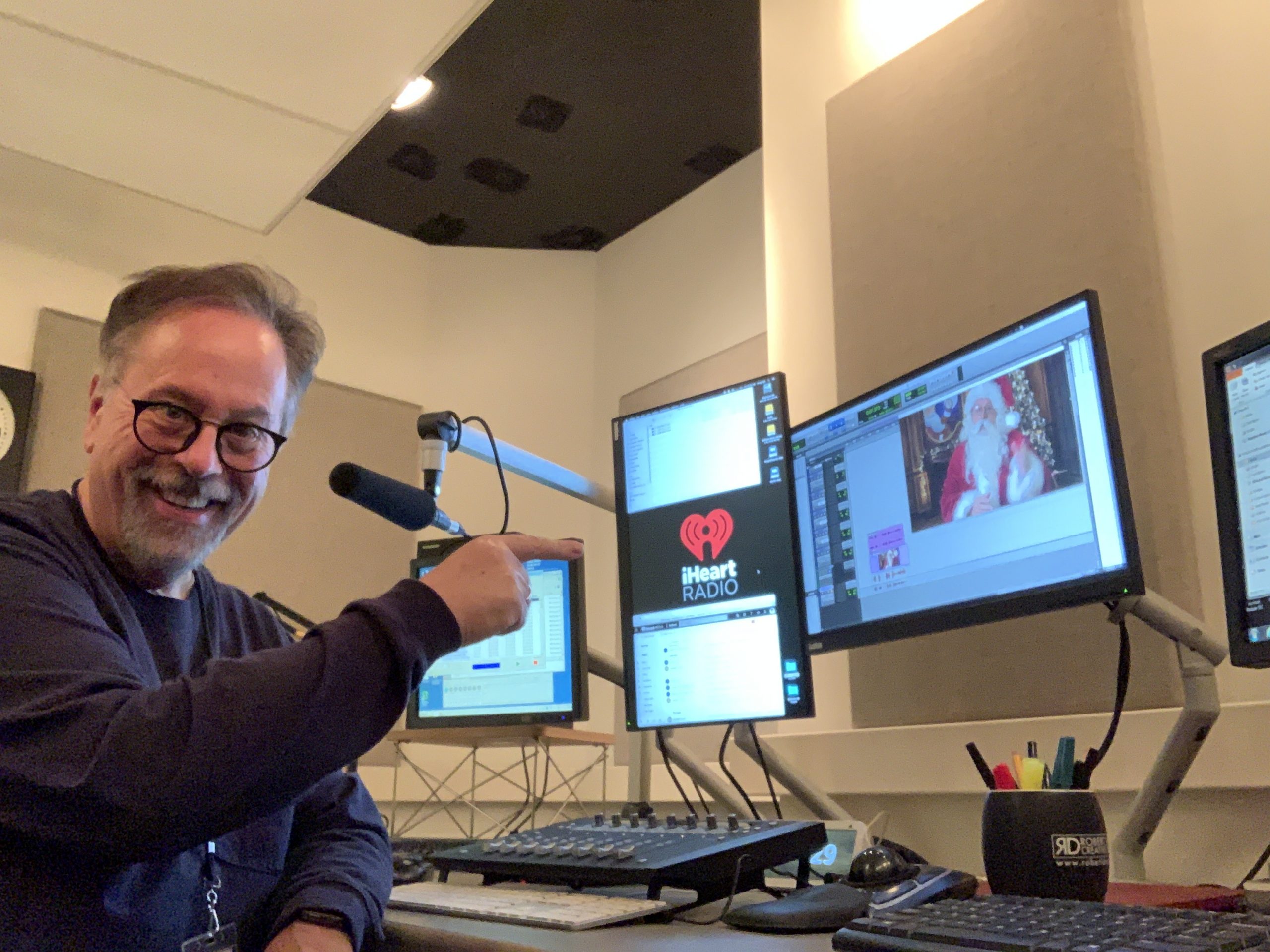 Howard at iHeartRadio NY pre-pandemic. You can tell it’s pre-pandemic because he looks so happy!

It definitely made it more transportable. What just a couple of decades ago were conference table-sized mixing consoles, tape decks, records/CDs of beds and effects – essentially a room full of clutter – has (for me, at least) been winnowed down to an iMac, a 16×10-inch Artist Mix and a couple of external hard drives. Some would even say that’s too much, and I can certainly do it all on a nice MacBook Pro. But the fact that I can run the on-air marketing of a 50,000-watt NYC heritage station and a national music network from one quarter of an apartment bedroom for almost a year and a half is just plain mind-blowing to me.

On the road, I take my MKH-416 and a MacBook Air, since I restrict my travel work to just straight VO and no production. My home studio and my studio at iHeartNY are functionally identical. An iMac with two 27” monitors at home (a Mac Pro at work), AVID Artist Mix, a CalDigit TS3 Plus hub, the MKH-416 with processing set to a gnat’s eyelash to reduce any room noise, and most importantly, a Varidesk stand-up desk. For soundproofing, I use an exclusive proprietary system of several comforters from Target stapled to the wall. The studio in NY is a bit more high-end.

Pro Tools. I tried others like Logic Pro and Adobe Audition, but I keep coming back to the bloated but high-ceiling second-nature necessary evil. My favorite plug-ins include Butch Vig Vocals (I must have sold at least a dozen other production people to it), Speakerphone, the venerable Harmonizer and the RX8 suite – especially the RX8 outboard Audio Editor for removing vocals for the mini-documentaries I do for iHeartRadio Broadway. 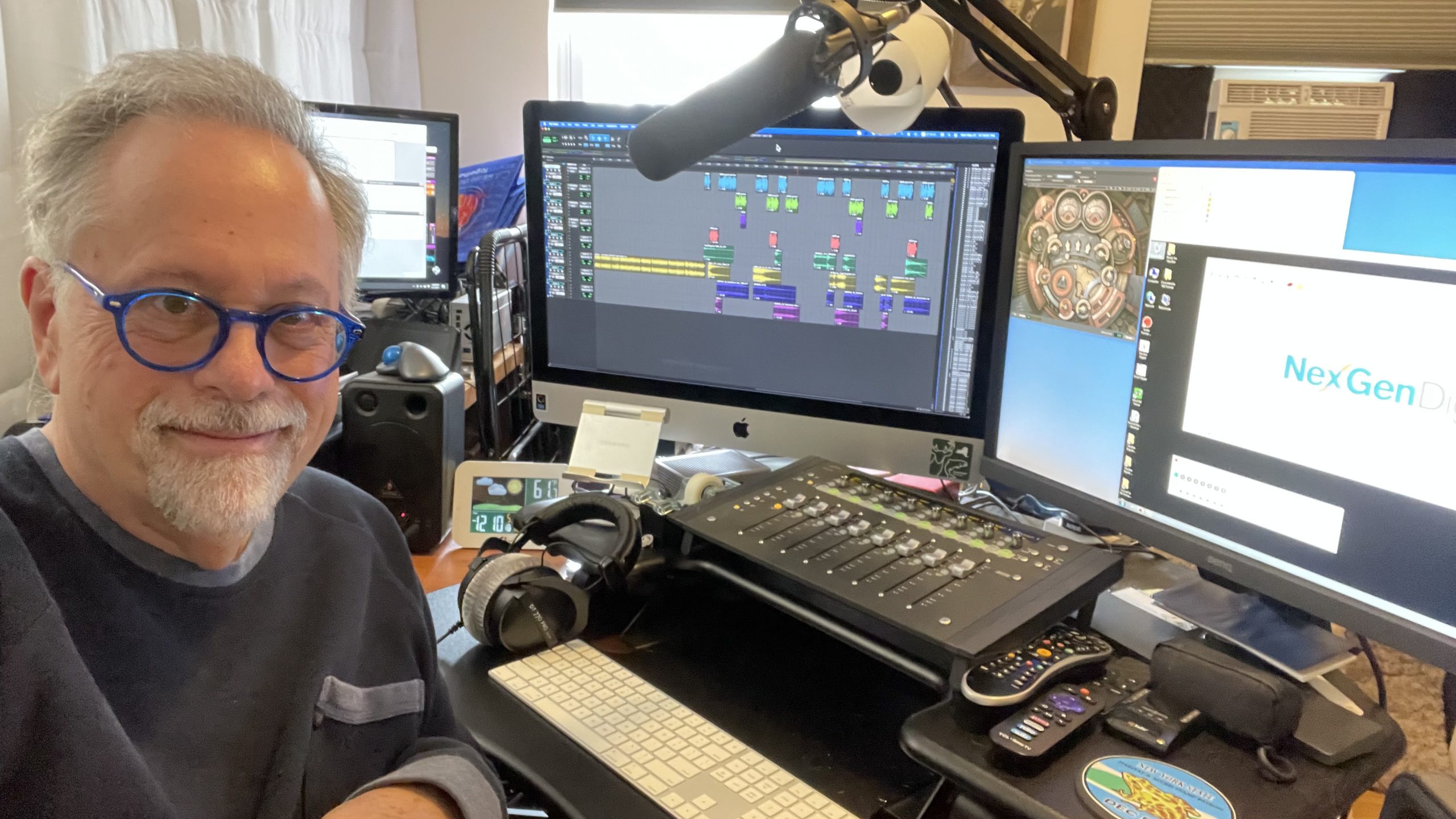 Yes and absolutely. I’ve had coaching by some remarkable professionals. Pat Fraley vowed to “slap the radio out of your voice” and now I can narrate a lot more naturally. Ginny McSwain taught me the art of performing rather than just talking. Susan Blu gave me the tools to try voices I never knew I had in me. Dave Walsh has a great TrueTell course that brings out your “realness.” I can go on, but you’ll be amazed that no matter how many classes you take and how many coaches you have, you NEVER stop learning something new. I think that’s another reason why we love VO. It’s constant growth and discovery.

Even though I’m working full time, I devote practically all my downtime to my clients. They’ve been with me for many years, and they completely understand that my number one priority is to my main gig, and if they need something in a hurry, that’s my lunch break. Beau Weaver calls it the “Golden Handcuffs” – it’s a great way to make a living and be of service to your clients. Just don’t attempt to go out for a coffee or sandwich during coast-to-coast business hours! It’s what we do and we do it gratefully.

Fortunately, I’m really proud of my track record. My clients and my home base do very very well and have done so for many years. I limit my client list to devote the right amount of time to their needs, but though I’m definitely not marketing myself for quantity, I am seeing new patients. 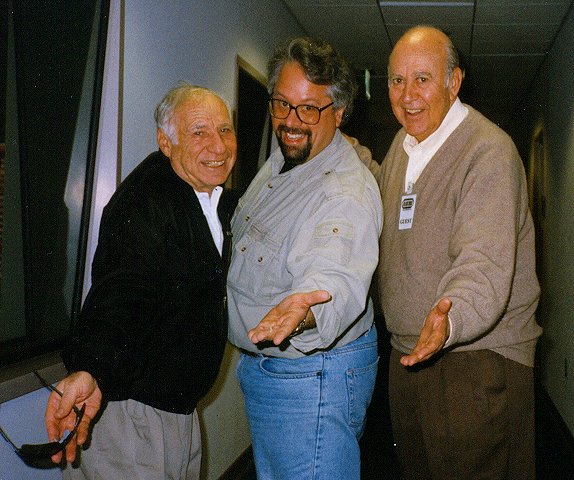 Howard with Mel Brooks and Carl Reiner at KABC in 1997!

Your voice is an instrument, and you can customize it to do so many tones. Use all parts of your mouth…the back, the front, the corners…just sending your voice through different shapes of your mouth opens up your repertoire.

Absolutely. Imaging is all about messaging with a tight budget on words. It’s almost like the seven-word rule in billboards. Hit them with the message and make sure you leave a mark before you run. Commercials have more storytelling, more explaining, more introducing to a new thing. They have the luxury of 30 or even 60 seconds, so you can be a good friend telling the listeners about that thing.

3 – No matter how many people tell you you have a great voice and should be on the radio, GET TRAINING.

The pros do it relentlessly. Amateurs need it even more.

In radio? The 70s. Lots of opportunities for work since each and every station had its own ownership. Lots of local management that could get you free food or a great apartment. Lots of chances to get your act carved out to get to the bigger locally run stations. I think it was the best time to be in the business.

When I could eat real pizza, sausage and mushrooms.

My late great dad. I want to see the look on his face when I tell him after spending decades in rock and roll radio, I ended up as Creative Director of the radio station he loved so much, playing it in our house every evening and driving us kids nuts – WOR.