Behind the Mic: John Hunerlach 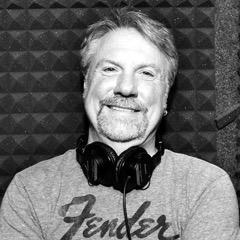 John Hunerlach is the William Wallace of voiceover . . . “You can take my voice but you will  never take my . . . FREEDOM!!!!” Having been held exclusive to an unnamed and wholly awesome satellite radio entity for many, many years, John Hunerlach is finally free to unleash his talent on the outside world . . . and boy, he has talent in spades!

The variety of calls for reads!

Someone heard me on KWK in St. Louis & called me up!

An investment firm in St. Louis! The morning we launched Howard Stern’s channel on   SiriusXM was pretty cool, also Macy’s Thanksgiving Day Parade working in Don Pardo’s booth on the SNL set was a thrill.

I didn’t like it much. Later I learned about how you hear yourself speak through your inner ear so it’s really different out of a speaker. 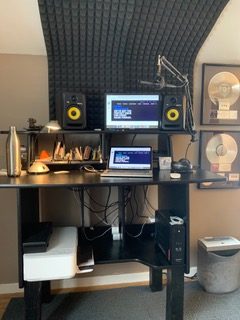 Liberating…with my rig I can work anywhere at any time!

I use the same for both to affect consistency: Sennheiser MKH416 through a UA Apollo Twin that was set up by George The Tech.

It’s straight VO for me so I’m an Audacity guy. Native to Apple, bulletproof.

I set aside recording sessions throughout the day. I don’t audition much.

Referrals. Word of mouth is the only thing that sticks IMO.

When it comes to VO work, studio, and gear, what are your most ingenious methods/discoveries for saving time and cash?

I use Digital Sound & Video to distribute my sessions to clients. This has improved the efficiency of my work more than anything else. I now don’t even think about the distribution of my sessions and can focus solely on my reads. 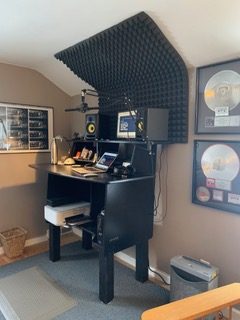 John’s set-up is so nice, we’re showing it to you twice!

What is the best voice processing trick or voice-over technique everyone should know?

Speak softly. VO is the most intimate medium there is.

I might have liked to be at Woodstock under the right circumstances e.g. not sleeping in the mud! LOL