Specials to Include “Oldies But Goodies” Throwback Music and Caller Remembrances of Laboe, With Clips From R Dub’s 2019 Radio Interview With Laboe

LOS ANGELES, CA – October 11, 2022 — Benztown, a global leader in radio imaging, voiceover, programming and jingles, announces the release today of two radio specials honoring the life and career of radio giant Art Laboe, who died at his home in Palm Springs, CA, on Friday, October 7, 2022, at age 97. Hosted by Sunday Night Slow Jams’ R Dub!, a longtime friend and colleague of his mentor Laboe, a two-hour special is available free to stations for airing tonight or any night this week, and a four-hour special is available free to stations for Sunday broadcast. Both specials will include Throwback music from Laboe’s show, memories and stories from Laboe’s listeners when R Dub! opens the phones, as well as clips from his 2019 radio interview with Laboe about his career and life.

Both the two-hour and four-hour Art Laboe radio specials are available for download NOW. Interested stations should contact Mark Wilson, VP Affiliate Relations, Sunday Night Slow Jams, today at mw@benztown.com or at 917.957.6249 for more information and to download the specials.

R Dub! first worked with Laboe in 1996 when Laboe bought the radio station R Dub! was working for in Tucson (KOHT-FM), then as his Program Director at KHHT-FM in L.A. in 2007, and since 2011 as PD of XHRM-FM in San Diego.

R Dub! recalled: “Art was more than a DJ – he was 100% ‘family’ to all of his listeners. He was like the favorite uncle, grandfather, or Godfather you’d love to see every Sunday at family dinner. It’s going to be tough not getting together with him every week. He was an incredible inspiration to me and to so many others who loved and admired him and learned so much from him.”

R Dub! noted: “What made Art so special was the fact he was able to entertain so many generations. Up until the end, he had loyal listeners in their 80s and 90s, and at the very same time, 13- and 14-year-old kids who wouldn’t miss a show. There aren’t many (if any) radio personalities that have been able to transcend and speak to so many generations simultaneously.” He added: “Art was synonymous with good times, amazing oldies, special dedications, and those good night kisses over the airwaves. He endured nearly eight decades of change while consistently staying true to himself and his fans and that’s just one of the million reasons he was so loved and adored by his fans.”

Laboe was a pioneering radio personality who began his broadcasting career in 1943 at KSAN in San Francisco. For decades, Art was at the heart of the West Coast music scene and worked on groundbreaking stations including KPOP and KRLA. He was one of the first DJs to take live dedications, on location, broadcasting from Scrivner’s Drive-In in Los Angeles. Laboe invented the phrase “oldies but goodies,” and was among the first to license material from several labels for successful “oldies” albums that would sell millions. In addition to hosting the syndication “Art Laboe Connection,” he worked as a concert promoter, helping bring many forgotten artists back into the spotlight. The City of Los Angeles declared July 17, 1981, as “Art Laboe Day,” when he received a star on the Hollywood Walk of Fame. Laboe’s last show was produced last week and broadcast Sunday night. R Dub! presented Laboe with a Lifetime Achievement Award in 2019, on stage at a “Sunday Night Slow Jams” concert, in front of 10,000 adoring fans. 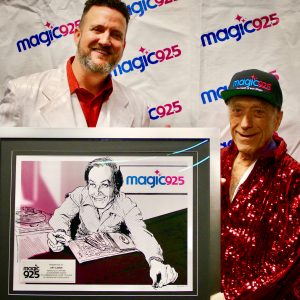 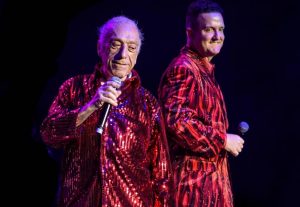 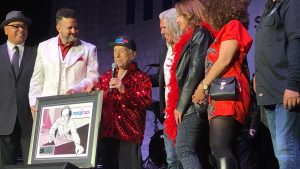